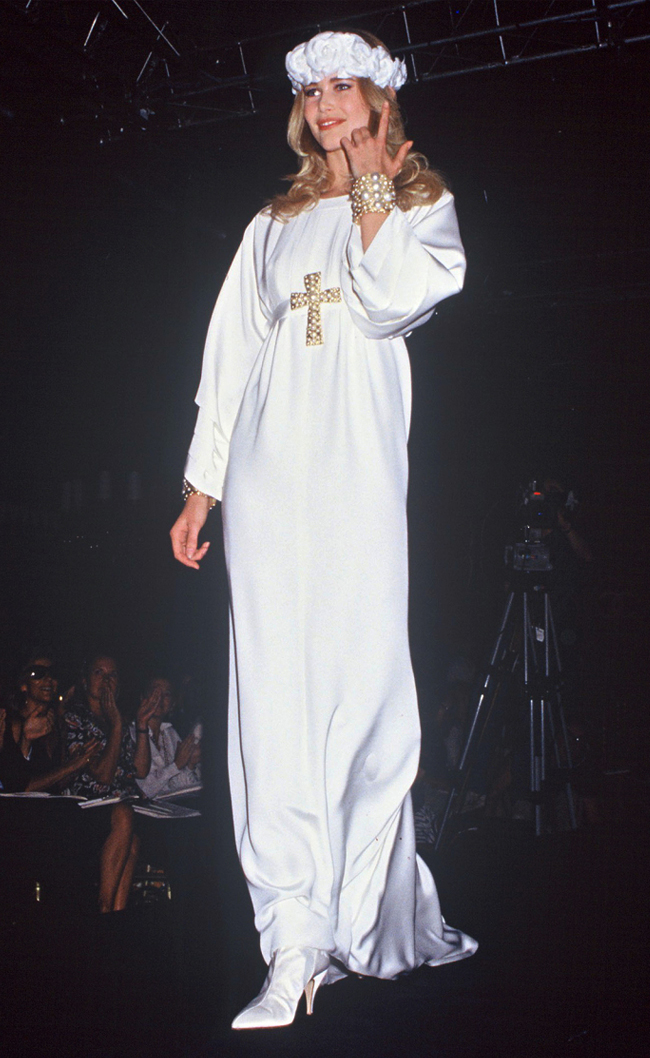 Another phenomenal Lagerfeld bridal creation modelled by Claudia Schiffer, this one from the fall 1991 Chanel couture collection features the religious elements that were everywhere in the early 1990s. This deceptively simple design embodies what so many brides hope to evoke: purity, sweetness, and romance. 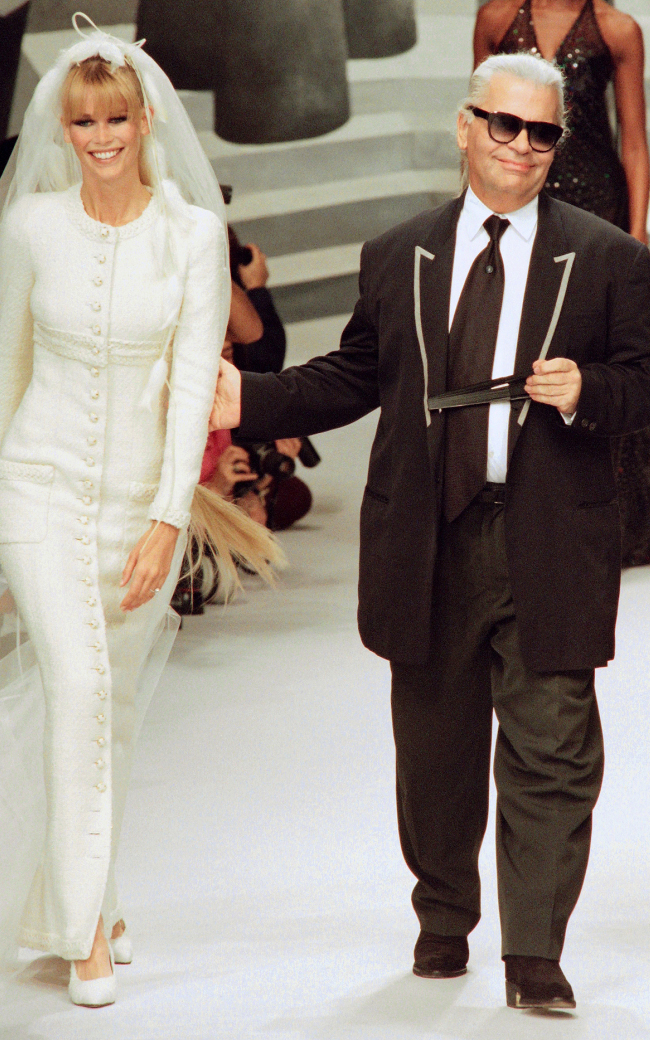 Claudia Schiffer was one of Lagerfeld’s most prominent muses, modelling many wedding gowns for him. This particular button-down piece from the 1995 Chanel couture fall/winter collection is sophisticated, timeless, and utterly stunning. 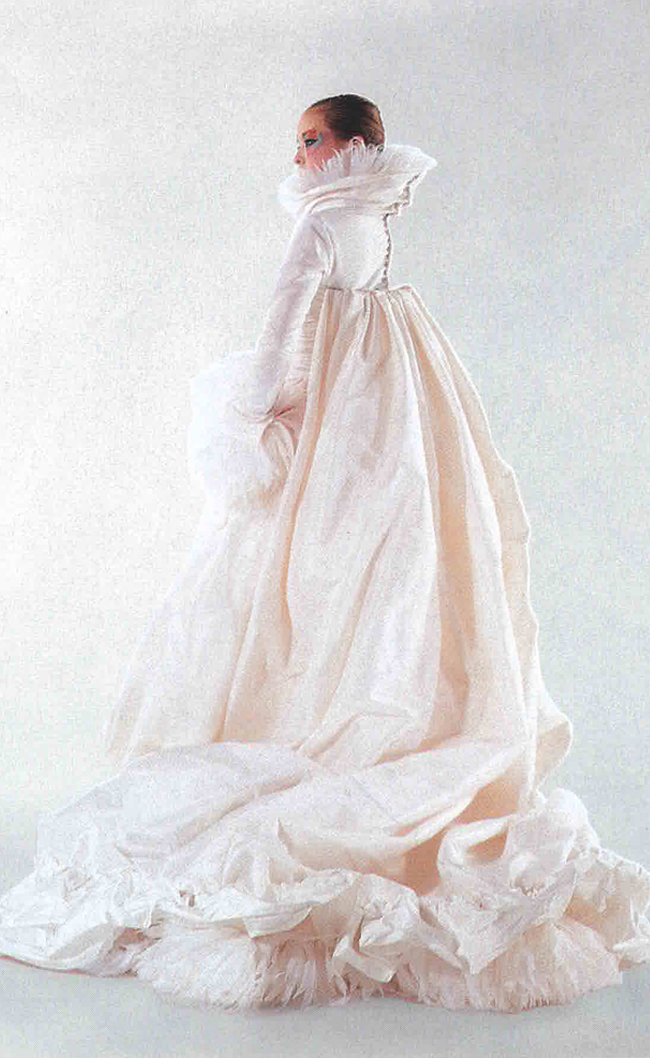 This sensational Chanel couture gown was photographed by Lagerfeld himself for Numéro magazine in March 2000. Calling to mind the light airiness of whipped cream or clouds, this gown is nothing short of heavenly. 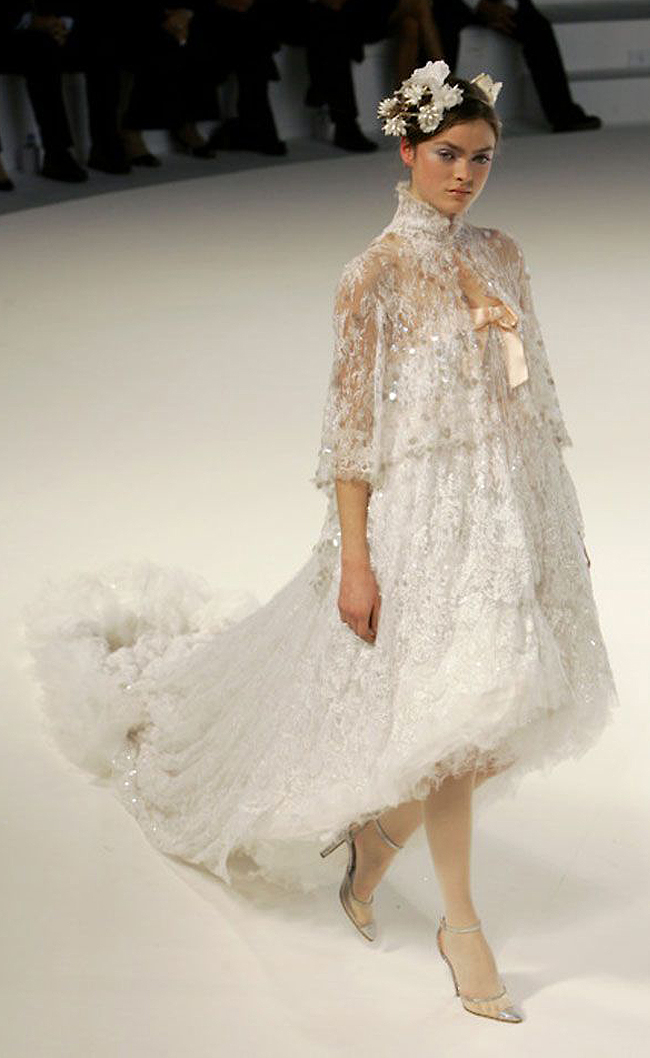 A complete dream. This dress from Chanel’s Spring 2006 couture collection features the softest of elements combined with sharp sparkle and very defined textures. It plays with blending youthful touches with mature refinement. 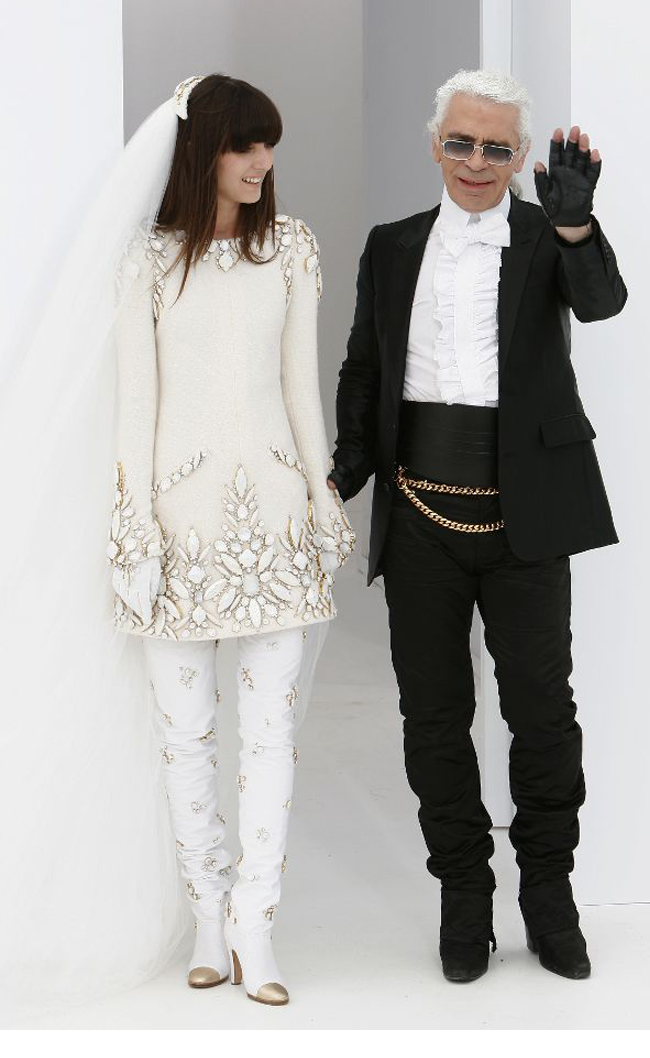 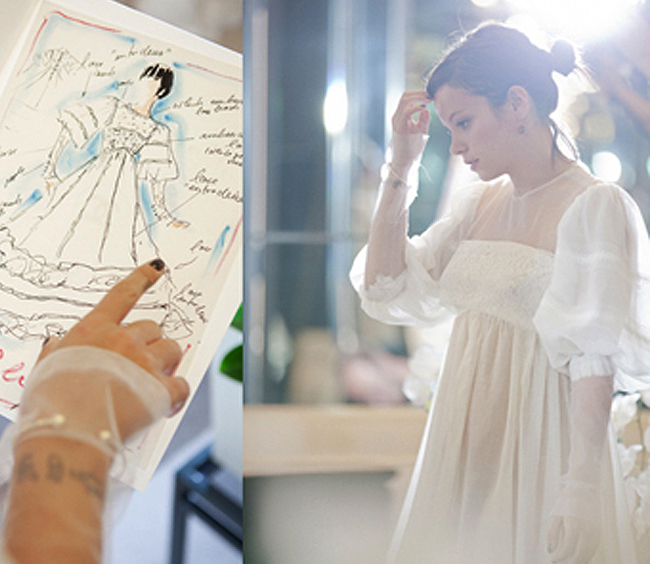 Lagerfeld designed this reception dress for singer Lily Allen’s wedding in June 2011, and it’s so ethereal and lovely that it threatened to outshine her actual wedding ceremony gown. A simply magnificent dress! 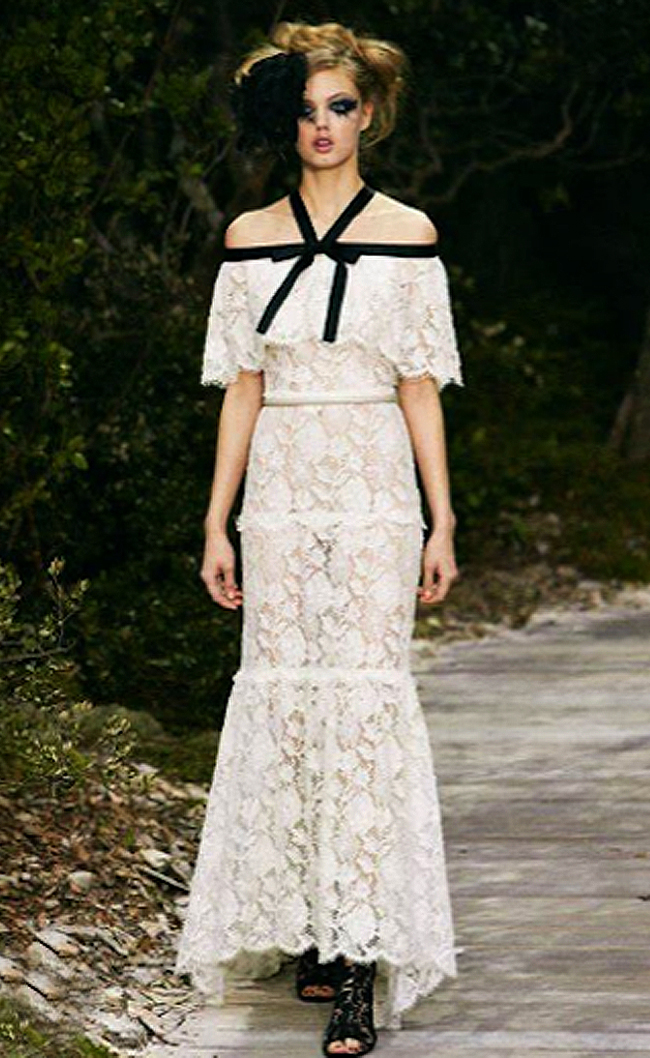 This gorgeously feminine dress from the Chanel Spring 2013 couture collection brings to mind the bohemian styles of the 1970s, with a element of highly-updated taste. Delicate and simply dripping with romance, this piece is absolutely astonishing. 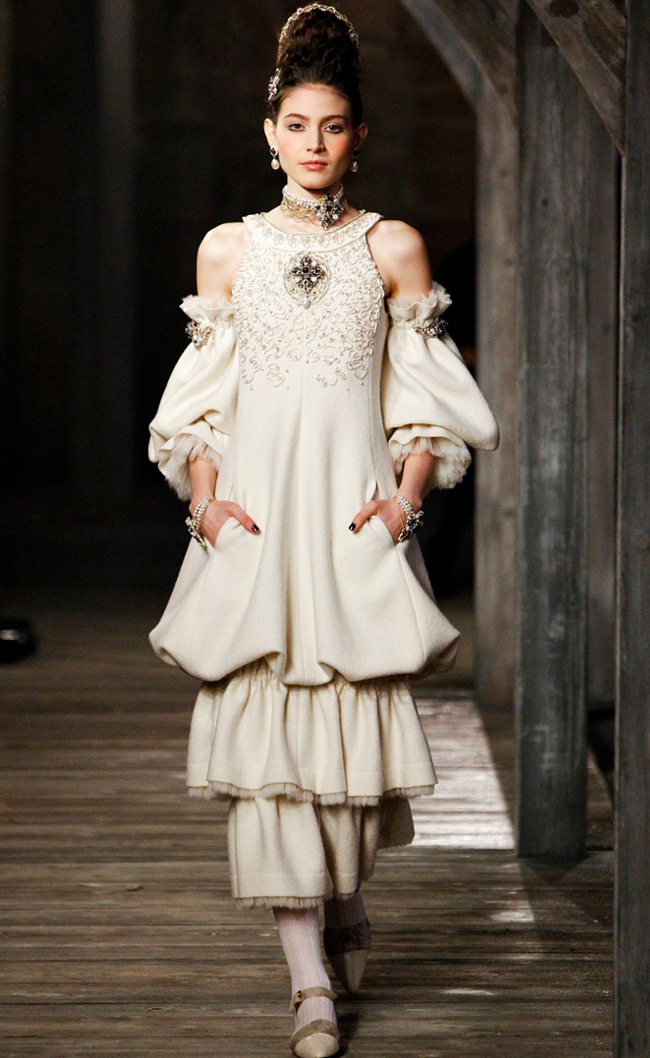 Lagerfeld himself referred to this collection as “Barbarian romance.” This absolute thing of beauty from the Chanel Pre-Fall 2013 collection would be the ultimate winter wedding look, with its heavy ruffles, statement sleeves, and snowy embellishment. 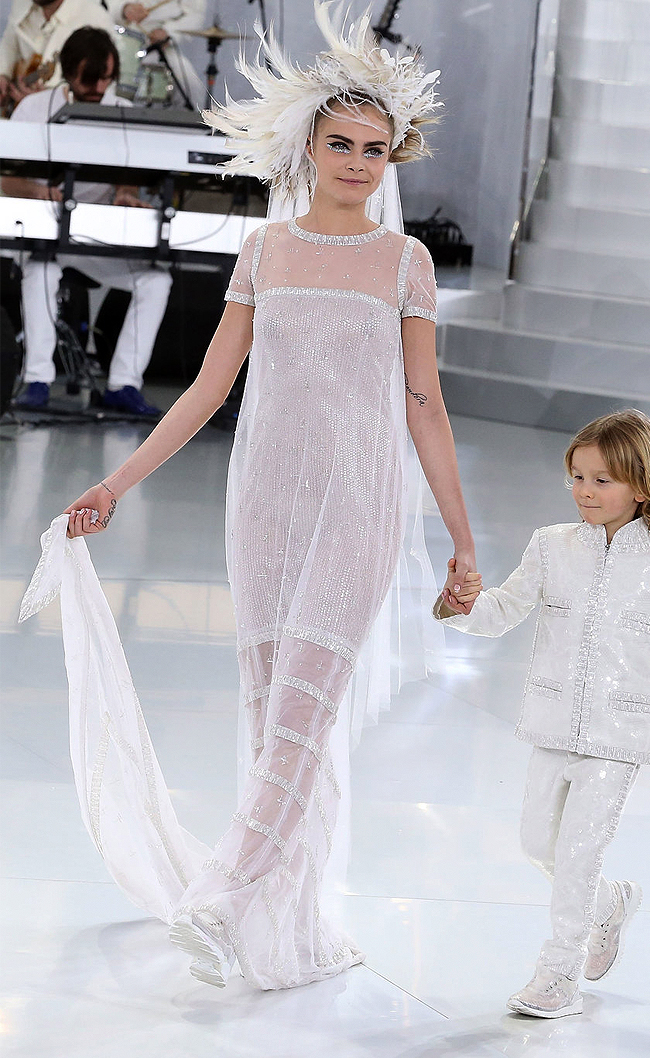 Cara Delevingne models one of Lagerfeld’s most famous bridal dresses at the Paris Fashion Week couture Spring/Summer 2014 show. One of the most fascinating things about this gown is its timelessness. It could have fit as perfectly in 1925 as it could right now. A masterpiece of design. 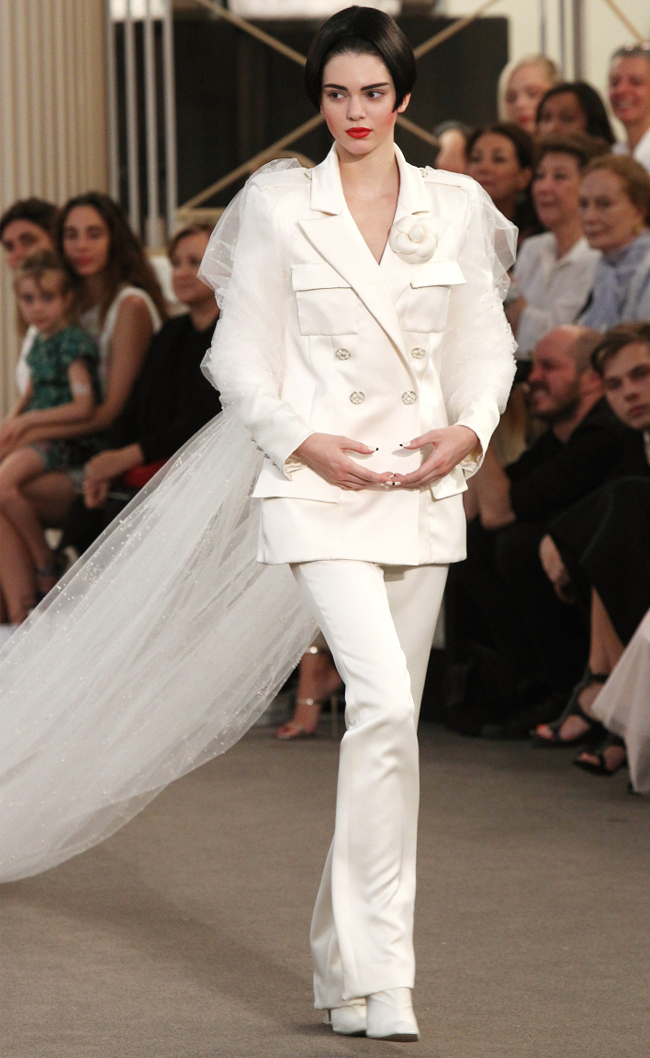 Devastatingly chic, this white satin bridal suit from the Chanel couture fall/winter 2014-15 collection incorporated masculinity into the idea of a bridal look. Modelled by Kendall Jenner, the wide-shouldered, double-breasted ensemble brought to mind men’s fashion from the 1940s. 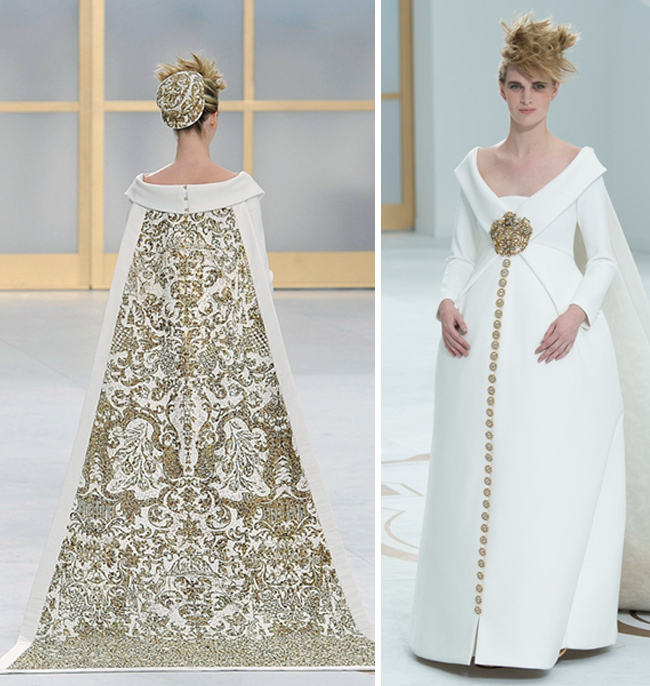 One of Lagerfeld’s most iconic wedding gowns, this dress from Chanel’s fall/winter 2014-15 couture show featured an extraordinarily ornate brocade cape in back, and the actual gown in front was designed for a pregnant bride. This maternity wedding gown is what fairy tales are made of. The gold buttons in front don’t only accentuate a pregnancy; they flatter and celebrate it—and that incredible galaxy of a cape reminds everyone that the bride wearing it is, indeed, a queen. 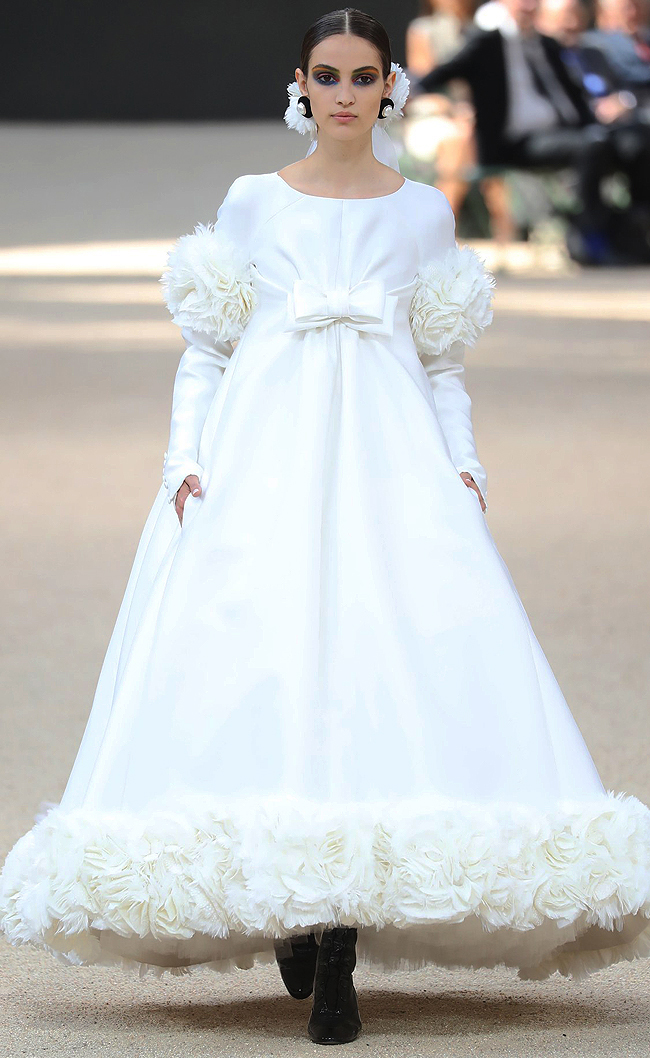 This stunner of a gown was the first out at the Paris Chanel couture fall/winter 2017-18 show—and with good reason. With its frothy trim, elegant neckline, and perfectly-placed bow, this piece radiates everything about a wedding. Model Camille Hurel showed off this beautiful dress flawlessly. 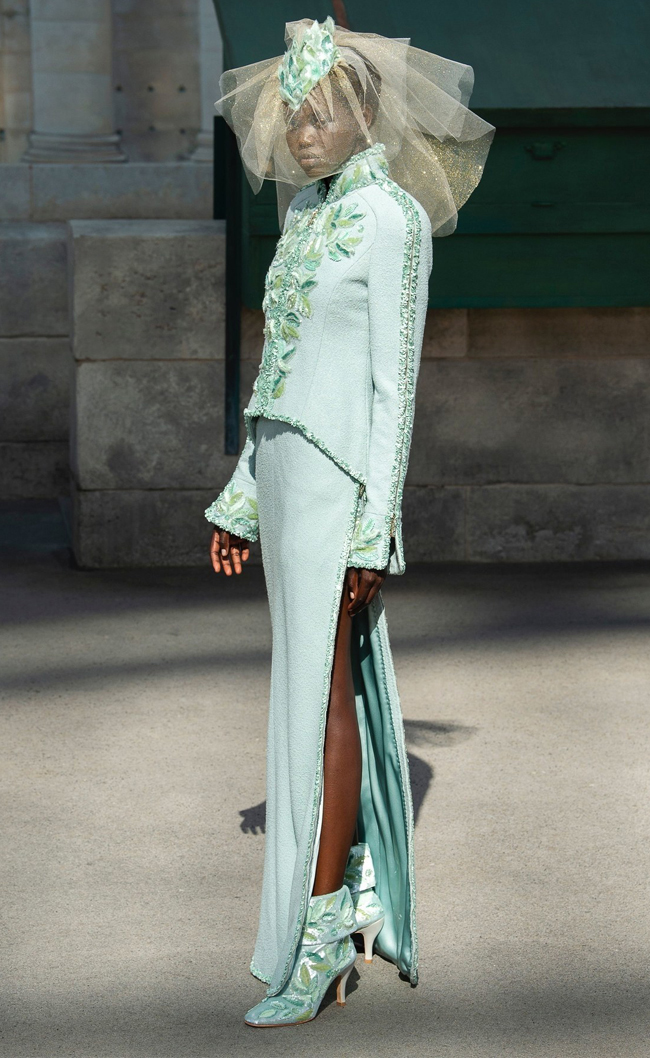 One of Lagerfeld’s last “brides”, Adut Akech, is a vision of beauty in this mint-colored bridal suit from Chanel’s couture fall/winter 2018-19 collection. This outstanding look, which pulls from an almost Edwardian or military style, is softened by its ultra-feminine veiled hat.

On February 19, 2019, the world lost a true fashion icon with the passing of 85-year-old Karl Lagerfeld, the head of Chanel and a giant in the industry who was absolutely unparalleled in his legacy. He had been suffering from pancreatic cancer, and was so unwell that he wasn’t able to attend last month’s Chanel couture show in Paris.

Lagerfeld began his career as an assistant to French designer Pierre Balmain, and then moved on to work with Jean Patou, for whom he designed 10 couture collections in five years. During the 1960s and 1970s, he designed for several fashion houses, including Chloé (which he took over in 1966), Tiziani, and Fendi, for which he was the creative director of until he died. In 1984, he launched his own label—”Karl Lagerfeld”—but it was a year before, in 1983, that he signed on at Chanel, which he is arguably most well known for.

Chanel’s official statement on Lagerfeld’s passing says, “It is with deep sadness that the house of Chanel announces the passing of Karl Lagerfeld. A prolific creative mind with endless imagination, Karl Lagerfeld explored many artistic horizons, including photography and short films. The house of Chanel benefited from his talent for all the branding campaigns related to fashion since 1987. Finally, one cannot refer to Karl Lagerfeld without mentioning his innate sense of repartee and self-mockery.”

It is with complete admiration and respect that we look back at some of Lagerfeld’s most stunning bridal creations.

With over 70 years of remarkable creativity and influence in the fashion industry, Karl Lagerfeld most certainly left his very unique mark on the world. In 2010, he received the Couture Council Fashion Visionary Award from the Fashion Institute of Technology, which was created especially for him. His creativity and passion will be greatly missed.  This list was compiled by representatives at Olympia in Los Angeles.