On Saturday, the moment we’d all been waiting for arrived: The big reveal of the highly-anticipated wedding dress as Meghan Markle stepped out of her car at St. George’s Chapel, Windsor Castle, for her royal wedding with Prince Harry. Only, it wasn’t by Ralph & Russo or any of the other designers rumored to be the likely designers. Instead, the boatneck haute couture wedding was designed by Clare Waight Keller for Givenchy.

Today, Kensington Palace released Keller’s sketches for Meghan’s wedding dress. Prior to this, the palace had said in a statement that Keller – a British-born designer who became the French fashion house’s first female artistic director last year – and Meghan “worked closely together” on the design.

In a Sunday tweet, the palace once again emphasized the collaboration that went into the dress, saying the new Duchess of Sussex and Keller worked to ensure that the design epitomized “a timeless minimal elegance referencing the codes of the iconic House of Givenchy.”

The palace also released a sketch of Meghan’s veil, which she and Keller designed together as well. “Ms. Waight Keller designed a veil representing the distinctive flora of all 53 Commonwealth countries united in one spectacular floral composition,” the tweet reads.

After changing out of her white Givenchy Haute Couture gown, Meghan Markle changed into a gorgeous Stella McCartney gown for the evening reception, by all accounts a lively affair during which the bride broke with tradition and made a speech.

She didn’t design the dress for the ceremony, however Stella McCartney still had a starring role in the royal wedding by creating the bride’s evening gown.

And today the British designer, 46, spoke of her pride as she shared exclusively with WWD a sketch of the slinky halter neck gown Meghan, 36, wore to the evening reception at Frogmore House. ‘I am so proud and honored to have been chosen by the Duchess of Sussex to make her evening gown and represent British design,’ she told WWD. 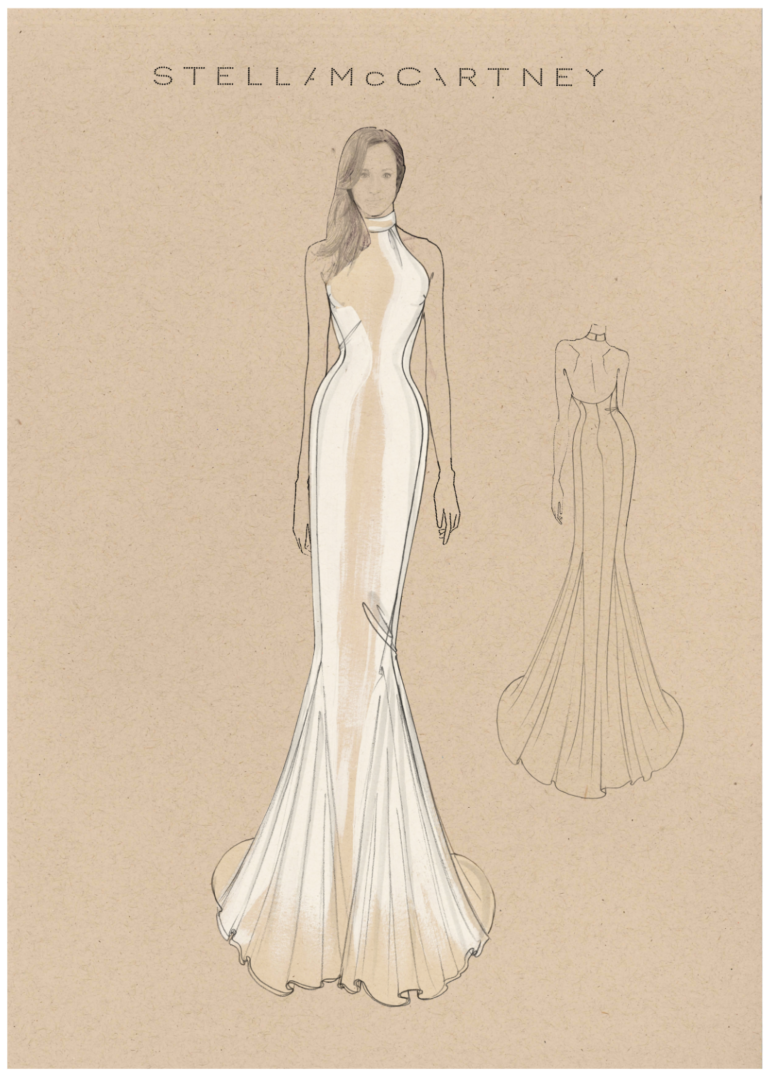 I am so proud and honored to have been chosen by the Duchess of Sussex to make her evening gown and represent British design,” said McCartney. “It has truly been one of the most humbling moments of my career and I am so proud of all the team on this stunning sunny royal day.

McCartney also dressed the mother of the bride, Doria Ragland, for the reception. Ragland wore a scarlet long-sleeved dress in silk cady, nude alter suede sandals and a brass gold box clutch.  McCartney was one busy designer prior to the royal wedding: She dressed Amal Clooney in bright yellow silk cady midi dress and Oprah Winfrey in a blush dress with lace trim for the ceremony.

Royal Wedding Countdown: Will Ralph and Russo Be the Designer Behind Meghan Markle’s Gown?